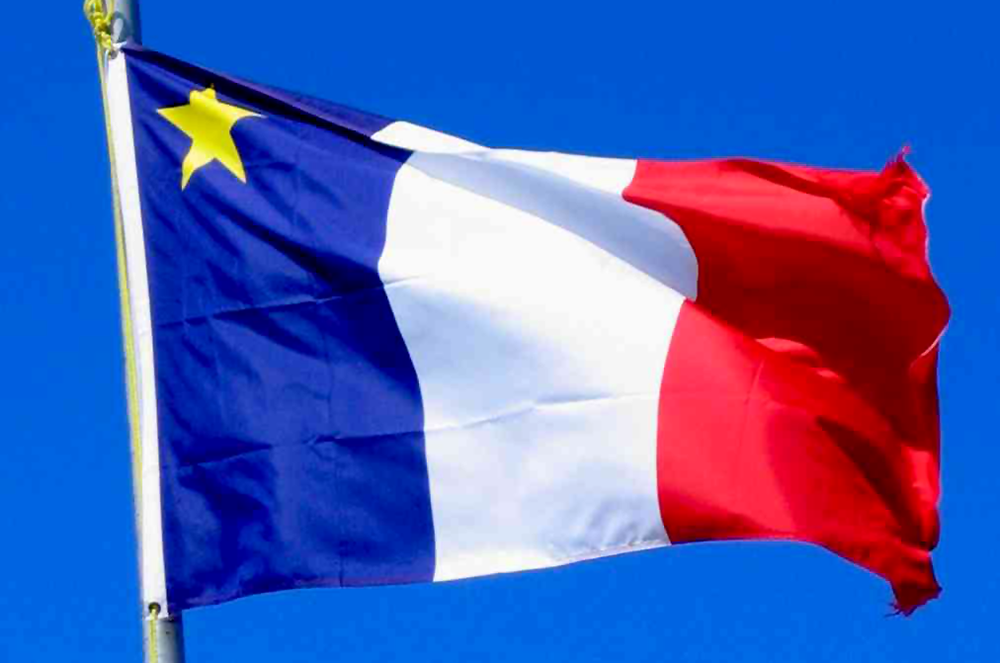 You cannot write Cajun history without writing their Religious history.

In 1884 in Brunswick, Canada the Acadian people adopted “Our Lady Of The Assumption” as the patroness of the Acadian people. A fact ratified by Pope St. Pius X. August 15 is celebrated as her feast day. The song “Ave Marie” was picked as their National Hymn.  A flag was adopted with the French tricolor to which a yellow star was added in the blue field. The star represents “Our Lady of the Assumption”.

When some of the first French people went to Nova Scotia, the land that was to be Acadia was under French rule. Many left France for a better place to live or for new land, who knows all the reasons. When they first came to Canada it was not because of religion. The first recorded confirmation of a French fishing vessel was in 1504 off the Banks of New Foundland. King Francis I in 1515 pulled a strategic marriage, incorporating the independent Duchy of Britain into metropolitan France. By the 1550s the St. Lawrence River as far as Tadoussac was visited by French fur Traders. Maps that were published in 1548 identified the peninsula of Nova Scotia as “L’Arcadie”. Forty-nine fishing ships from La Rochelle, France were fishing the Grand Banks by the year 1560. From 1525 to 1598 the religious and political cultural conflict was the main motivation for more French immigration to the new world. The wars that were going on in France strained the economy and it is very hard to say which person left for what reason.

In 1603 King Henri IV of France sent expeditions to set up a permanent fishing and trading post at Tadoussac. Most of the French settlers came to Canada at that time.
In 1603 the first permanent fishing and trading base was started on the Grand Banks. King Henri IV of France granted colonization rights between the 40th and 46th parallels, what we now know as New England and Nova Scotia.

In 1605 the colonists, supplies and two building were move to a more protected area of the Annapolis Basin. They drew up plans for a fort like wooden buildings surrounding a courtyard. The settlement was named Port Royal, one of the first permanent settlements in North American. Now Annapolis Royal, Nova Scotia. Those first French people became known as ACADIANS.

King Henri IV was assassinated in 1610. By than French claims on Acadia lands were not recognized by England. The colonies were continually contested by both the French and the English.  In late
1613 Port Royal was destroyed by a English military expedition from Virginia led by Samuel Argall, a Virginia pirate. The colonists fled into the hills, those who survived lived with the Indians continuing a haphazard fur trade with France. You might note that it was not till 1620 the Pilgrims arrive at Plymouth Rock.

In 1632 it was then given back to the French by King Charles I of England. The Treaty of St. Germain-en-Laye was signed and a renewed period of French colonization followed. In 1681, La Salle, a former Jesuit from Quebec set sail down the Mississippi River to the Gulf looking for new land. He named the new land he found Louisiana in honor of his king. Sir William Phips in 1690 led an expedition that sacked Port Royal. Prisoners were taken and brought to Boston. In 1699 Iberville and Bienville Exploring along the Gulf Coast entered Louisiana’s Lake Pontchartrain and went inland as far north as Baton Rouge. They brought the first Jesuit (member of the men’s Roman Catholic Society of Jesus) with them.

In 1713 the French government sold out the Acadians to the British by giving Nova Scotia (Acadia) to Great Britain. The British took the Acadians lands by force, harassing and persecution the Acadians in many ways. Attempts were made to force them to bear arms against France and renounce their Catholic faith. The Acadians refused to do so, and many left and journeyed to the Louisiana Territory.

In 1727 King George I of England died and was succeeded by King George II who passionately hated both the French and the Catholics. To understand why the English hated the Catholics and French so much you have to know a little history of The Church. In the year 1532 King Henry VIII had broken away from the Roman Catholic Church: the Pope would not approve the divorce he wanted. At that time the King started his own church the “Church of England”. In 1534, the Act of Supremacy made the king head of the Church of England

In 1754 some people fled Canada and Nova Scotia and traveled overland and down the Mississippi River to Louisiana.

May and June of 1755 Lieutenant Governor Charles Lawrence secretly plotted the details of the cruel deportation of the Cajuns. On October 8 to the 27 in the year of 1755 the British began a cruel and systematic program of deportation. In 1758 Louisbourg fell, refugees found along the St. John River and Cape Sable were rounded up for deportation. In 1759 Quebec fell.

As many as 5,000 French Acadians were deported to the 13 original British Colonies, where  their Catholic faith had been outlawed. (it was 1776 before they adopted the Declaration of Independence) The refugees being French, Catholic and penniless found nothing but hatred awaiting them there. They were not even allowed to get off the ship. Some did manage to get off the ship and made their way back to Acadia. Others found safety in the French Islands of Martinque, Guadaloupe and St. Dominque. Some Acadians found refuge and evaded capture by living among the friendly Indians.

On May 18, 1756 the Seven Year War began and the English were forced to dump many refugees in Maryland, The Carolina’s and Georgia. Most of these refugees set out for Louisiana. Some of the Acadians were sent out to sea where they set sail for Louisiana stopping where they could to get supplies. As many as 1/4 of the deportees died on the way, either from shipwreck, epidemic or starvation.

In the Treaty of 1763 France ceded all their Canadian lands and territories east of the Mississippi to Great Britain. All French military and most civilians move west of the Mississippi to French Louisiana. By the end of 1763 some 2,342 Acadian refugees were scattered among ten French port cities. The 1764 census showed that that were still 1,762 Acadians in Nova Scotia. 1,076 of them were imprisoned in Halifax, and many of them eventually set sail for the French West Indies. They later migrated to Louisiana.
With the end of the war the prisoners that were held in concentration camps in England were liberated on May 16, 1763. Starting on May 16, 1763, refugees were shipped out to different places.

On December 29, 1763 Maryland refugees wrote of slavery and such hardship, that out of the 2,000 that had made it to Maryland there were only 810 left. Most of these survivors went to St. Gabriel, which was south of Baton Rouge.

Hanoverian Monarch
In 1727 King George I of England died and was succeeded by King George II who passionately hated both the French and the Catholics. To understand why the English hated the Catholics and French so much you have to know a little history of The Church. In the year 1532 King Henry VIII had broken away from the Roman Catholic Church because the Pope would not approve the divorce he wanted. At that time the King started his own church the “Church of England”. In 1534, the Act of Supremacy made the king head of the Church of England.

The Acadian refugees in Pennsylvania and Georgia wrote how, many of their children were kidnapped or sold outright to slavery. That they had not been allowed confession or any other religious rights for as long as eight years. The Acadians that made it to South Louisiana, found much of the best land was already owned by the French and Spanish settlers who came earlier. The great majority of them were given traveling direction only and ordered to leave the New Orleans area. These Acadians made their way to the less accessible back country of the Opelousas and Attakapas Indians Here the Acadians lived relatively isolated and undisturbed for years. By 1790 over 4,000 Acadian refugees had relocated in Louisiana. In 1810 another 6,000 Acadian refugees arrived, fleeing the West Indies’ political turmoil.

Donate to Christ the King – Lafayette